Ok so about the dingy. Depressing as it is, we have to share the story. A few nights ago we were having dinner on another boat. Robin had picked up James Bond our go-to local friend and brought him to meet Kathy and Dave, from the boat Lightspeed as they had just arrived in Aur.  After dropping James back to shore Robin returned to Lightspeed tying the dingy to the back of their boat as one always does when visiting others.  We had a great night with Kathy and Dave who have been cruising for a while and had some great stories to share.  At the end of the night we were saying our goodbyes, climbing up through the cockpit to the stern of the catarmaran, when all of a sudden I said to Robin “where are we?” – what I meant was ‘where is the dingy?’  Immediately I looked over to the other hull thinking that Robin had tied up to the other side, but alas our dingy had decided to go on a voyage without us.  Dave and Robin quickly got in their dingy, Kathy handing them flashlights and a VHF radio, and they rushed off into the dark to try to find our lost friend.  When I say our lost friend, I really mean it like that. When you’re on a boat your dingy is your way off the boat to shore. Without this crucial part of the team it makes getting ashore a teensy bit tricky.

Sadly Dave and Robin returned around 20 minutes later without our friend, calculations showing that the dingy would have been outside the reef on the other side of the lagoon by the time they went looking. Dave dropped a very dejected Robin and myself home.  Robin was mortified with what had happened and was blaming his seamanship etc etc, but as I and many others have reassured him probably every sailor has some sort of ugly dingy story to relate, no reflection of his abilities.  We’ve tied up our dingy literally hundreds of times this year, and over a hundred times we’ve come back to our dingy, unfortunately this time it was not the case.

Next morning (after a sleepless night for Robin) we got straight on the SSB radio and talked to people in Majuro who came up with some options of second hand dingys, and new dingys we can order from the states. Since it is New Year we decided not to go back to Majuro straight away but will head back there in a few days to try to sort it out.  It sounds like there are a few options for us, but it may mean a slight change to our upcoming itinerary.  It is just a wait and see game at the moment. Robin is feeling better now. Also he saved our kite board from imminent disaster last night. We were sleeping out in the cockpit again and a gust of wind knocked the board that was sitting on the forward deck off the side of the boat into the water. Within a few seconds Robin had woken up, put his hand over the side of the boat and retrieved the board that was floating past.

And here’s some of the positives.. 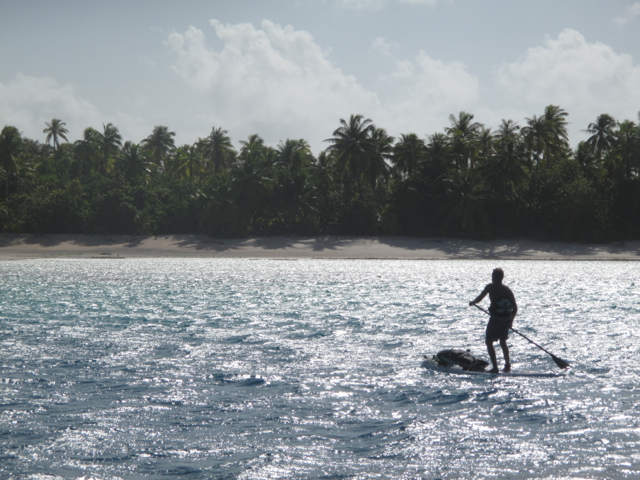 Robin with a slightly better system for getting the gear ashore 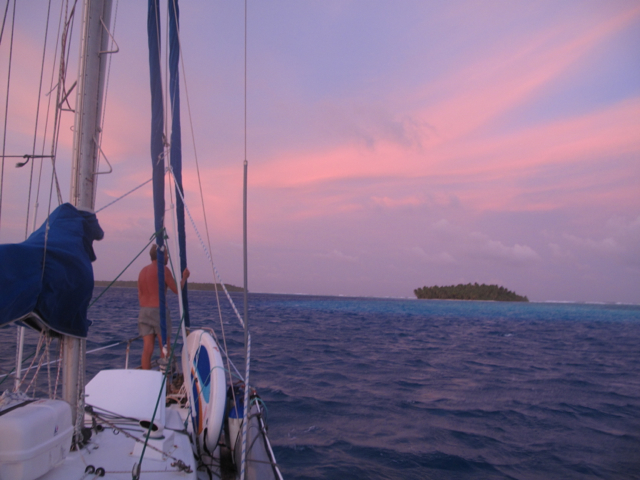 Yeah we’re still in the Marshalls